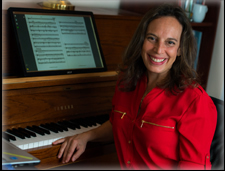 Tracey Grimaldi is a lifelong musician and theatre lover who accompanied and coached singers for years before officially launching her professional vocal teaching studio in 2001. She has a dynamic, industry-centric, results-oriented approach to teaching to develop all aspects of a performer, incorporating book building, presentation skills, breath support and vocal technique for theatrical auditions and performing arts program admissions, while maintaining the passion of storytelling through song. In addition to focusing on live audition preparation, Tracey’s background in TV/film production has proved invaluable in helping students produce audition videos for digital submissions.

Tracey’s students have appeared in Broadway, National and Regional productions, including: The Book Of Mormon, Matilda, Cats, An American In Paris, Jersey Boys, Wicked, RENT, How 2 Succeed, The Lion King, Shuffle Along, The Prom, Mary Poppins, Hair, In The Heights, West Side Story, Chicago, Get On Your Feet, Legally Blonde, 9 to 5, The Witches of Eastwick, Beauty and the Beast, The Merry Widow, Superfly, Smash, We Will Rock You, Evita, Leap of Faith, A Chorus Line, 13, The Capeman, The Civil War, and Pal Joey. Her younger students have gained admission to LaGuardia High School of the Performing Arts, PPAS, Special Music School, university performing arts programs, and have earned leads in competitive youth and regional theatre companies and summer programs, including Stagedoor Manor and French Woods.

Many of Tracey’s students are referred by the agents and managers she maintains productive relationships with due to her high casting rate. She brings equal enthusiasm to working with singers, actors and dancers. Tracey believes in the importance of tapping into each artist’s area of strength and that all disciplines of the performing arts should be connected. She works privately with adults, teens, tweens, and children from her Upper West Side studio, and teaches group workshops at outside studios and performing arts programs.Tracey holds a Bachelor of Music degree from Ithaca College with a minor in Communications. She attends professional development courses held by NYSTA (New York Singing Teachers’ Association), of which she is a proud member.

Tracey is also the founder, owner, and operator of Bleecker Prompting, Inc., a premier TelePrompTer company. She has worked with hundreds of celebrities, politicians, newscasters, industrial actors, and corporate executives, as a prompter operator, speechwriter, and public speaking coach for television, film, and video shoots and live events.