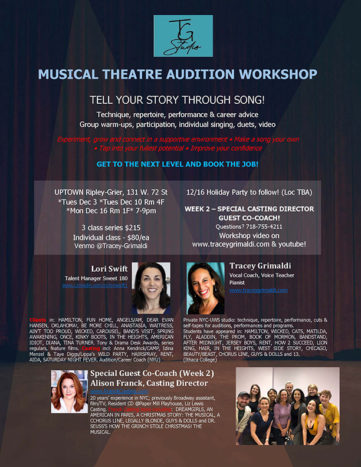 Check out the October 2019 workshop reel. We had a blast in class!

And it’s a wrap! Another awesome workshop series. Last class was Duet Night! Videos coming soon and will schedule a new series. Check in if you want to join us! 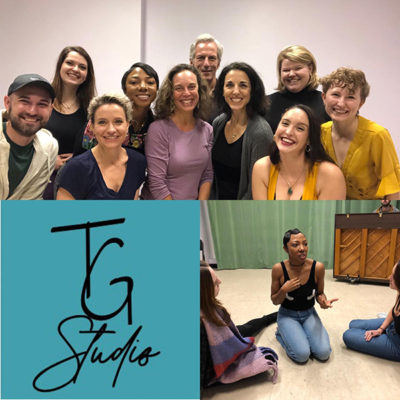 Lori and I are SO EXCITED to have a new workshop series planned!! Past workshops have brought everyone to the next level – and, as you can see from the workshop reel, we get great videos for participants to post on their websites and social media. The work goes deep, but we have SO MUCH FUN in class! Over the years, some wonderful and enduring friendships have blossomed as well. We support each other in this studio! Of course I am excited to have my students in class, but if you study with another teacher, you are equally welcome to join us. 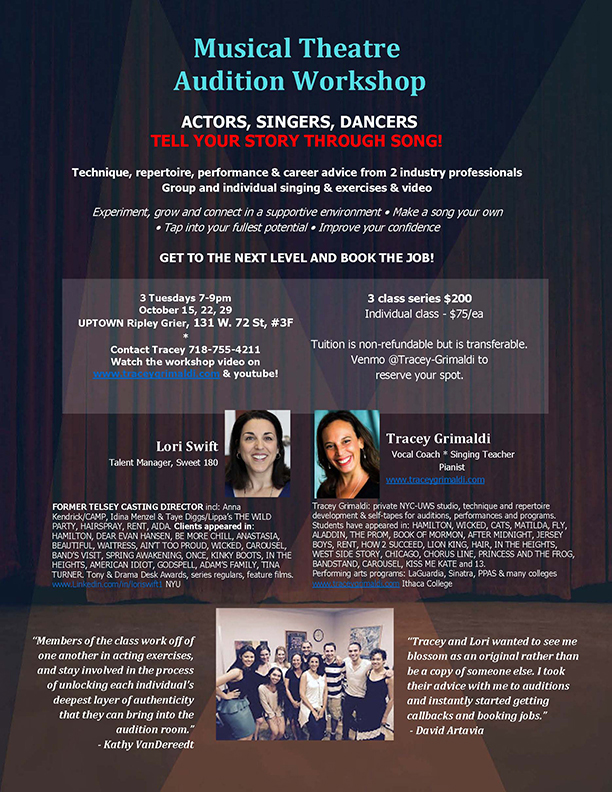 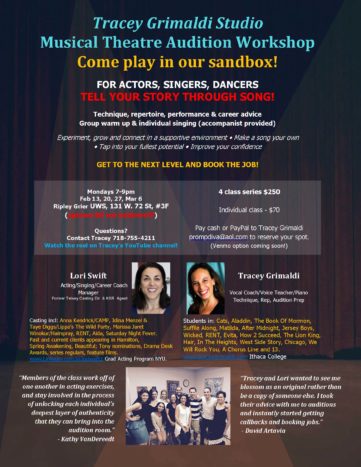 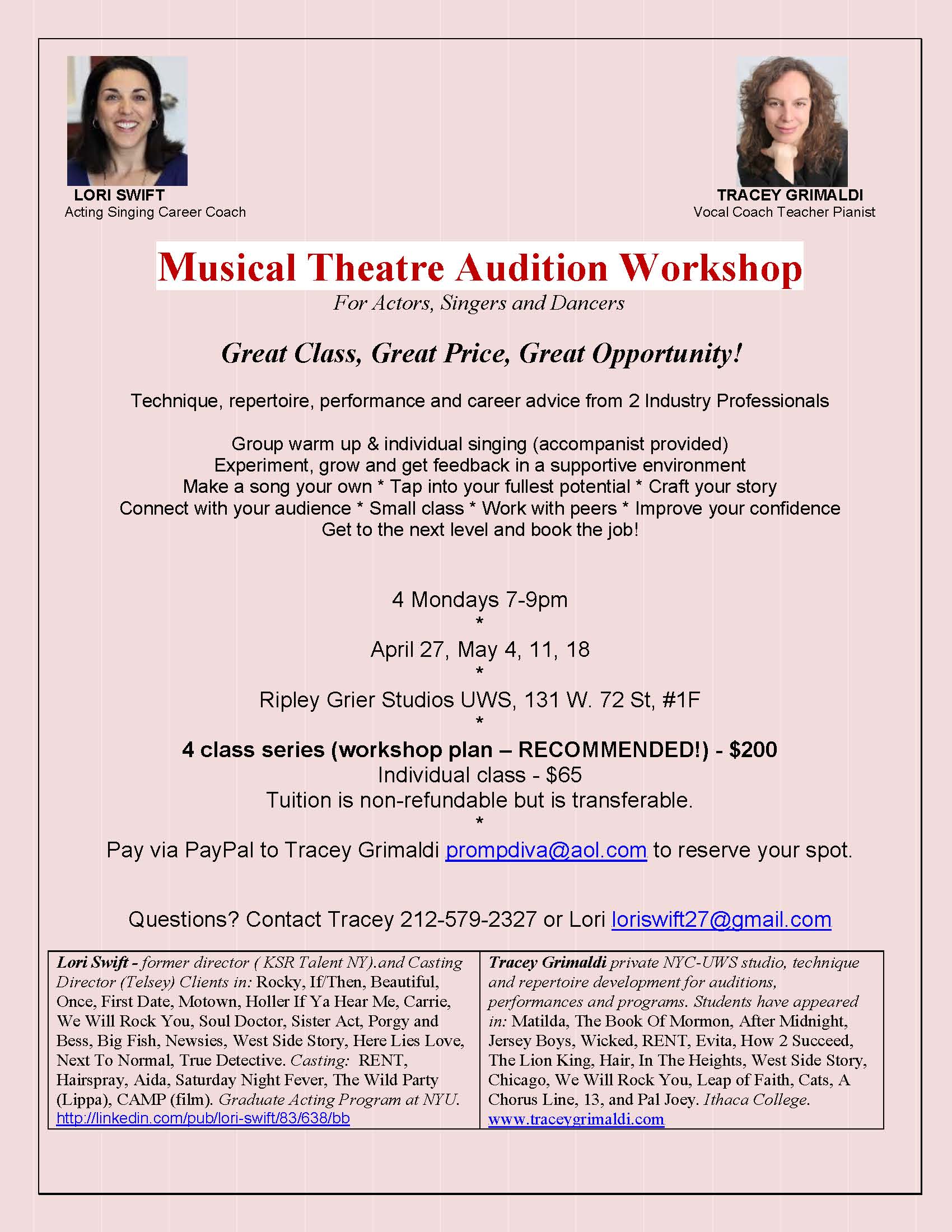 Do you have a website? A demo? A great headshot and resume isn’t enough anymore! Casting directors are increasingly relying on digital media submissions to prescreen who they invite to audition. They first review the video and/or audio files before looking at emailed or snailmailed headshots. Sometimes they don’t get to those at all. This is a huge time and money-saver for casting, who are eager to avoid spending lots on space and accompanists for auditions. So… get cracking on your site and demo. You may have some material already, if any of your past performances were video recorded. There are website templates you can plug into to build your site, if you have the skill and patience. I lack both, and am grateful to Patrick Sasso for building this site. Pat also does web design, audio and video demos for actors. He’s super nice and affordable. And by all means, if you have any decent video of yourself performing, put it on Youtube!

What makes a “good” song? A good audition song? When is a song a good audition song? Some songs work well in a cabaret set but don’t work in an audition room or translate beyond our small theatre community. Certain songs strike an emotional chord in many people, others are more unique to a particular songwriter, individual or a smaller segment of the population. Simply put, some songs are so personal they can seem indulgent. When I think of examples of pop songs that connect on a large scale, I think of Billy Joel’s “Just The Way You Are.” Who doesn’t want to be cared for unconditionally? Or Stevie Wonder’s “Isn’t She Lovely?”… Anyone who has had a baby or even held one can relate to the wonder of new life. Eric Clapton wrote a universal anthem for loss and mourning with “Tears In Heaven.” And of all the amazing songs to come out of our Broadway songbook, “Seasons Of Love” from Rent has broken through every barrier to ask – and answer – what love is.

This week 2 new students came into the studio, referred by their agents. 1 was an actor, the other a young folk singer/songwriter who was a recent TV talent show finalist. Neither had any vocal training or had ever been to a Broadway musical audition. Both had appointments for major auditions that their agents had set up. I had 1 hour – that’s it! – with each to prepare them. I had to boil 6 months’ worth of technique into about 20 minutes, then help the actor pick 2 contrasting songs for his show, the folk singer learn 2 songs from the lead role she was about to be seen for. I knew it was unlikely, under these circumstances, that either would book the roles. But I wanted to make sure they still felt their lesson was a valuable experience and that the audition process would not be scary. Well, here are their comments:

“Didn’t get a chance to tell you about the audition. It went really well. You totally prepared me for everything. He loved ‘The Midnight Hour’ and then he asked if I had something longer and I gave him the Sinatra. Thank you so much! There was no room for nerves because I knew what was coming.
🙂 I will back in town in a week and a half and as soon as I get a check I want to start my lessons!”
—-
“First of all! Thank you so much for getting me prepared for the audition. In just an hour you helped make singing 100 times easier for me and I’m so grateful for that. I didn’t get the part, but they did say it was a pleasure meeting me and they liked me but I just wasn’t right for the role. So overall good feedback. There were only nice things said and that makes me proud of myself! Thank you so much again!!”

Sooo busy lately with weekly students working extra hard and several newcomers and referrals. I’ve never been so booked. Everyone’s been showing up with great energy. We’re so excited for Allison Mixon, who booked Superfly, the new Bill T Jones project. Erin Wegner Brooks checked in to say how much she’s loving her stint as Vivenne in Legally Blonde, and she got a great review from a theater reporter. Sam Gedymin just finished a tour of a new musical workshop and got invited to do a reading of another new play directed by Moises Kaufman! Karlee Ferreira came this close with Bring It On, and is off to her appointments for Rock of Ages, and the new beach boys show, along with Laura Meade and Alica Taylor-Tomasko. John Sorensen-Jolink’s got a callback for Amazing Grace, just about everyone’s been in for Annie, and we still have 2 little Annie’s – Charley Tiernan and Anabelle Hoffman looking forward to their next round of callbacks (there have been several!) Speaking of Anabelle, she just nailed it at the open call for Mary Poppins and got a callback for Jane Banks. Go Bellie!

Was thrilled to see Samantha Zack doing her thing in How2Succeed again on Nick Jonas’s first night up. Thanks for the invite Sam! Derek and I were also celebrating his acceptance to Goucher College that night, so it was twice as sweet. So even as I’ve struggled through 2 months (!) of bronchitis and the sad loss of our beloved cat Fiyero, I am so grateful to have such fabulous students and for being part of the theater community.

Posted under: Congratulations
Next Page »